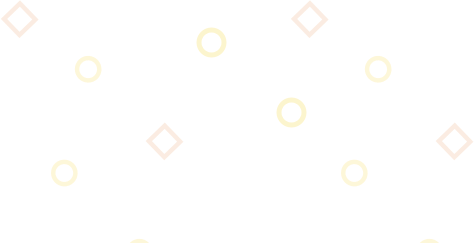 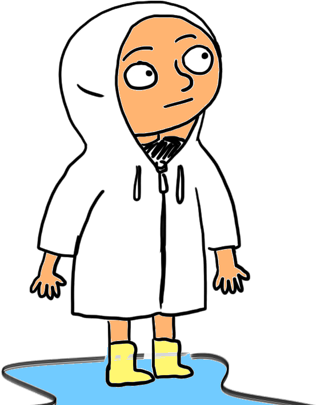 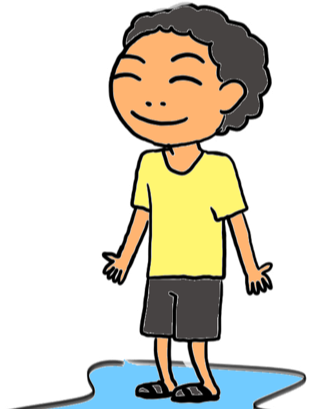 ALT-ER’s aim is to foster resilience in learners, lessen early school leaving, and give European children (ages 4 -6) a good start in their education. This site will have animation tools and games - as well as learning activities specific to the transition phase from kindergarten to school.

Brief instruction of the app. Use with your 5-7 old child as a parent or let the kids at kindergarden explore! 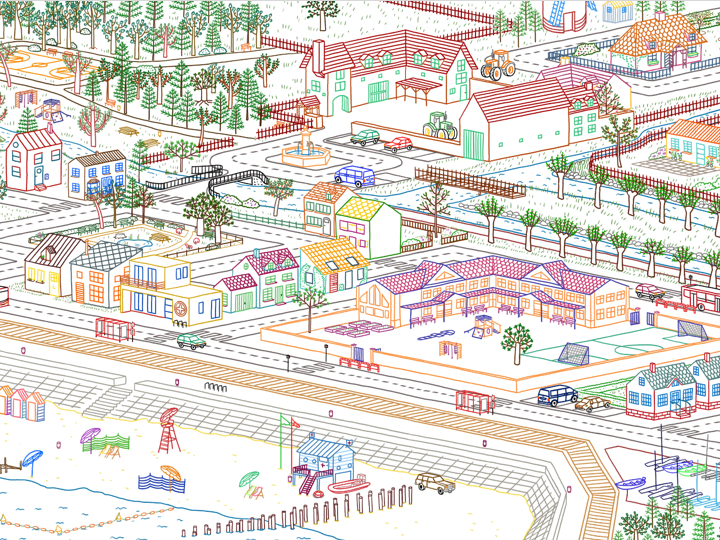 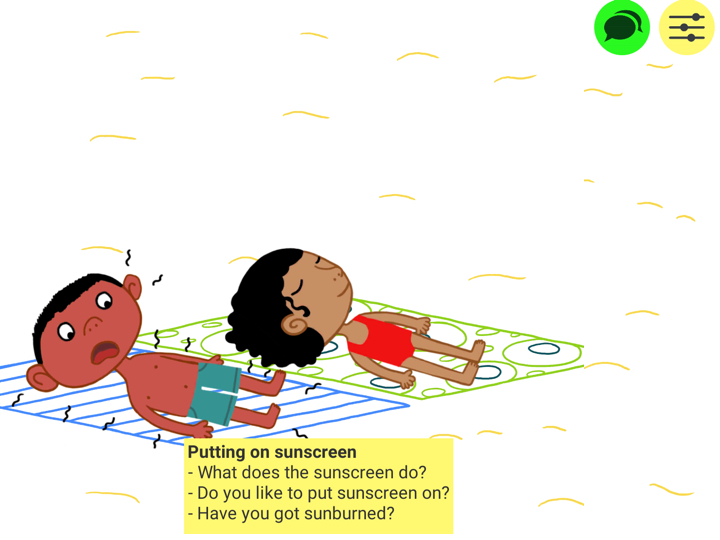 Turn on dialogue options to discuss the animated situations with your child. 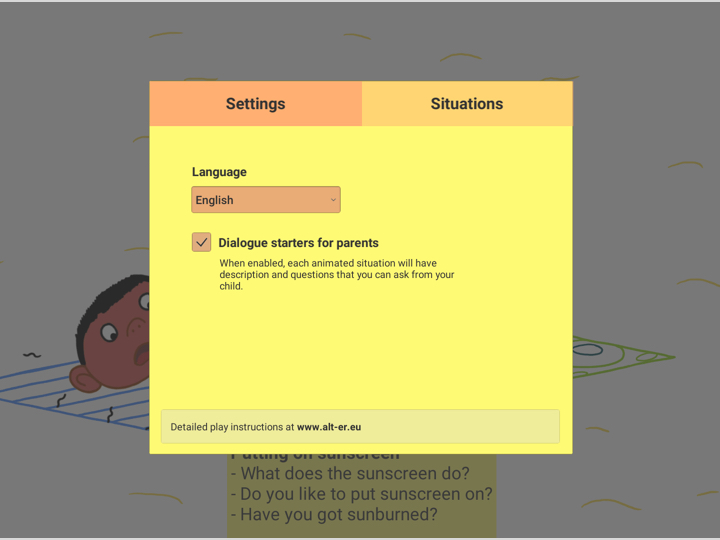 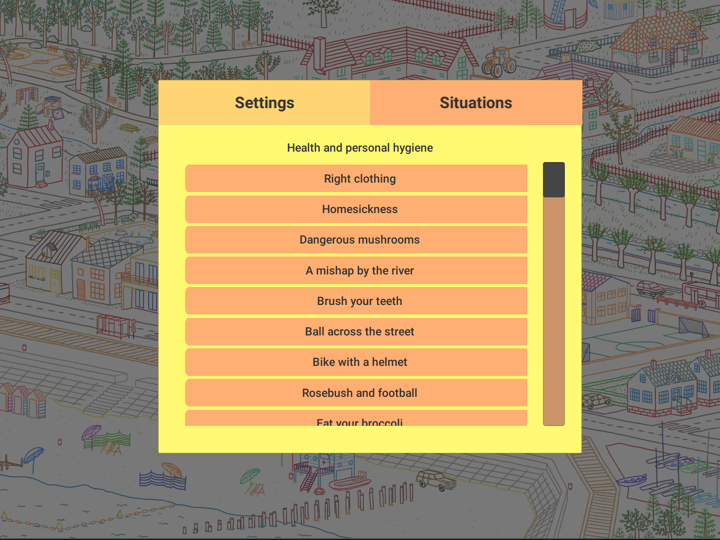 Jump to any of the 100+ situations with a click of a button!

Additional Materials
Additional tasks and resources that can be used with children aged 5-7.

The progect’s aim is to foster resilient learning environments, lessen early school leaving, and give European children (ages 4 -6) a good start in their education while providing and advancing technical skills in working with technology that will serve them well in life. For this purpose, the partnership has developed age appropriate ICT animation tools and games - as well as pedagogical framework specific to the transition phase from kindergarten to school.

These combined outputs are thought to be the basis for real change in understanding, appreciation, and practice as regard to benefits and potential of using ICT in ECEC contexts and will create an atmosphere that is hoped will, moving forward, effect EU concerns about early school leavers, enhance performance in education systems, and allow for development of digital competences that will facilitate and improve eventual entry to the labor market.

To this point, the project group has investigated the standards and practices in each of the partner countries and are compiling the knowledge into a graphic that will serve to contextualise the accepted processes in each country in order to draw parallels and inform external audiences of the expectations, standards, and practices that exist across the EU.

This has and will continue to provide insight into the areas of development necessary in each partner country, and allow for a scatter plot based on age range and assumed effectiveness of learning activities and goals for the project. This knowledge has and continues to form the basis for the framework we are developing, which will contextualise and justify digital tools for learning as well as prescribing a process for educators to interact with the toolbox that we are curating and creating original elements for.

We have enacted several workshops to this point both in the discovery phase and in further development of a concept that is effective for the deployment of the learning goals we are building based on the preliminary research. Initial concept designs were well received with younger audiences, but were rejected by those in the latter stages of the age band in question as being immature. This led to a reexamination of the issues coming to the forefront, and the best way in which to address them without ostracising any part of the diverse group of intended participants.

Teachers and students on the younger side of the age band very much enjoyed a preliminary concept we were developing that took a train as the main conceit, controlled by the user, and which stopped at activities along the way. As mentioned, this concept proved very popular among groups of younger oriented audiences, but was ultimately rejected by groups representing the older age range in question. Additional research determined that the concept was deemed to be age inappropriate by the older children on the grounds that similar concepts had been a part of their formative experience as toddlers, and were said to be “boring” and intended for younger audiences. Youth respondents referred to a LEGO app that functioned in a similar manner and claimed that was “a game for babies.” This conforms to research provided by multiple partners that young people are far more likely to identify with a concept thought to be slightly beyond their age than one that caters to younger audiences.

Additional testing commenced, and upon regrouping at the second partner meeting, experiences and research led a debate about the best strategy for moving forward. As a result, this train concept was replaced with a hide and seek construct that would be scalable to any age range. Group work has determined that the ease of inclusion of hints, and the manner in which each experience could be augmented and have benefit added by a teacher or parents’ involvement made this a perfect fit for the needs of the project, the target groups, and European students and teachers.

We have engaged with audiences outside the formal partner constellation, mainly represented by schools in each partner country that we have met and worked with to understand the processes they employ as well as their impressions of the activities and goals in development. This has been both a formal and informal process, and has generated both qualitative and quantitative results for consideration in the overall structure of the project and inclusion in the reporting packages. They have responded to questionnaires about the use of technology in their schools and home countries, have opined on the platform and layout of the toolbox design, and have helped crystalize issues that demand attention in the transition phase. Additionally, we have involved several technology and gaming related companies in contextualizing their understanding of the needs of games meant to teach. They have been important for helping the whole team imagine concepts and strategies.

The next phase is to enter final production of the animated assets, and build story worlds with loosely tied narrative guideposts that allow users to create their own story out of the world’s cast of characters and happenings. Students should be able to use the platform as a game based learning tool that is primarily interested in having them “fill in the gaps” and link disparate events through creative, self-reflective storytelling.

Have a question? We love that – get in touch with the Alt-Er team by dropping an mail to !

Artifacts as prompts for dialogue

Sign up now for a spot at the public premiere of ALT-ER (Animated Learning for Transitions –Early Recognition) an exciting Erasmus+ project that will debut in Copenhagen on August 30, 2019.

Alt-ER explores new areas of thought and methods for learning with a focus on ICT in the transitional phase between Kindergarten and primary school.

We will host a stop-motion animation workshop in conjunction with the unveiling of the Alt- ER APP, Toolbox, and Framework at Cinemateket, Gothersgade 55, 1123 Copenhagen from 12:00-16:00 with a diverse list of invitees in support of networking opportunities among a broad spectrum of international guests engaged with teaching and pedagogy.

The ALT-ER platform was developed by an international team focused on education, animation, and emergent strategies for working with parents, teachers, and most importantly, children - creating a digital tool for self-directed creativity and storytelling.

In addition to a stop motion animation workshop with experts in the field from our Animated Learning Lab, we will unveil the platform and the accompanying framework that we have created to ensure its effective deployment in the home and classroom with a select group of representatives from European pedagogic concerns, and hope you can join us.

Please feel free to reach out to KIJO@VIA.DK with any questions or concerns, or RSVP via the jotform link below: